In this post we refute the imprecise and false macroeconomic statements (or the so-called “alternative facts”) presented in the post written by Ha-Joon Chang and James K. Galbraith and signed by other 50+ economists that was published on March 26th, 2017 at CommonDreams. The goal of this post is to provide a simple but rigorous analysis to try to eliminate the misinformation and correct the distorted view of Ecuador’s economy presented in that post.

In particular, we focus on four “alternative facts” mentioned in that post regarding the following aspects of Ecuador’s economy: 1) the impact of oil prices in the economy’s performance, 2) the role of the central bank in the economy, 3) the fiscal policy cyclicality, and 4) the economic growth rate for selected periods.

Alternative Fact 1, from Chang and Galbraith post: “It has all but become conventional wisdom that the economic and social progress in Ecuador, such as it is recognized, resulted simply from a commodities boom and a spike in oil revenues. This explanation ignores the innovative and important reforms that the Ecuadorian government has enacted that have played an instrumental role and allowed the country to emerge, relatively unscathed, from the 2009 Global Recession and the more recent collapse in oil prices”.

Claiming that Ecuador’s economic progress as a result of the spike in oil prices is just conventional wisdom is an understatement. Claiming that the last collapse in oil prices (starting on the second half of 2014) left Ecuador’s economy unscathed denotes an absolute ignorance of Ecuador’s reality and also of the data. During Correa’s administration, oil prices explain not only Ecuador’s economic growth but also the economic downturns. The correlation between real GDP growth and oil prices during that period is 0.94. In contrast, between 2001 and 2006 the correlation falls to 0.27. Graph 1 shows the real GDP growth and the WTI price from 2001 to 2016.

It is also important to note that the collapse in oil prices in 2008-2009 and in 2014-2016 resulted in a severe slowdown of the economy in 2009 and in a deep recession in 2015 and 2016. This is not only clear from the data. Taxi drivers, hairstylists, owners of small, medium, and large businesses or even the informal sector could also date the beginning of the current recession within months after the collapse in oil prices and provide further evidence of how unscathed this collapse has left Ecuadorians. 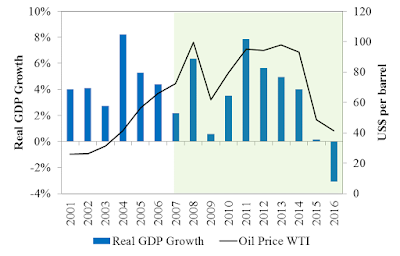 Note: The shadowed area corresponds to Correa’s presidency. Data for 2016 include up to the 3rd quarter. Source: Central Bank of Ecuador.

Alternative Fact 2. From Chang and Galbraith post “This explanation ignores the innovative and important reforms that the Ecuadorian government has enacted […]. These reforms included bringing the central bank into the government’s economic team, […]”.

The central bank involvement consisted of lending resources to the government in the amount of about US$5,300 million between 2014 and March 2017, coinciding with the collapse in oil prices beginning the second half of 2014. This amount represents about 63% of the central bank’s liabilities and about 5% of GDP. Graph 2 shows the evolution of this credit to the government. Weisbrot, Johnston, and Merling (2017), which this post also references, refer to this policy as “innovative and surprising” (page 15). What is surprising is that anyone would call this “quantitative easing”—it is not. It is the central bank funding government deficits. The government uses these funds on a weekly basis as a line of credit. Therefore, this “policy” does not have any impact on the interest rate, which is actually controlled by the government. It is not even innovative since other countries have attempted this in the past. Argentina implemented similar policies in the second half of the 19th century that ended with the decapitalization of the government’s bank and the abandonment of the gold standard (see Della Paolera and Taylor, 2001). 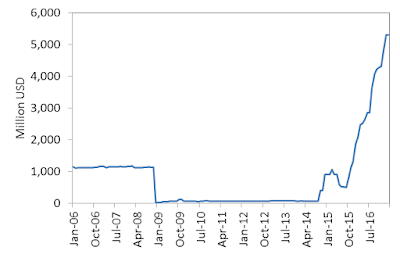 A more accurate description of what is really happening with the central bank is the following. The two main sources of funds of Ecuador´s Central Bank are i) the required reserves from the banking sector and ii) deposits from local governments and public companies, which are obligated to deposit in the central bank. Graph 3 shows the evolution of these two types of deposits (“bank reserves” and “public sector deposits”), which are a liability for the central bank, and the dollar reserves backing these obligations (“international reserves”). As graph 3 shows, since the end of 2009 the gap between these liabilities and the international reserves has been widening. Currently, only 38% of the central bank obligations are backed up with liquid assets. Even more worrisome is the fact that since January 2016 the international reserves are not even enough to cover the required reserves associated with bank deposits. As of March 24th, 2017 only 81% of these reserves were covered. Additionally, due to the low level of coverage reached in May 2016, the government recapitalized the central bank with new borrowing from China in May ($1,500 million), and tapped international financial markets four times (in August, September and December 2016, and January 2017) totaling $3,750 million. These international bonds pay interests between 9% and 10.75% and have maturities of 5 and 10 years. Thus, this practice goes against the Central Bank’s mission, represents a breach of its contract with society, and is not a prudent management of the Central Bank balance sheet. In a dollarized economy the only monetary tool that should be available for the central bank is the required reserve ratio. Lending money that belongs to people, companies, or local governments (which ultimately belongs to people) to the central government is a risky and irresponsible practice since it puts the dollarization regime under threat. 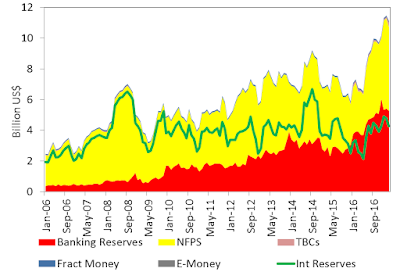 Alternative Fact 3: “This explanation ignores the innovative and important reforms that the Ecuadorian government has enacted […]. These reforms included […], countercyclical fiscal policy”.

Arguing that Correa’s administration has implemented countercyclical fiscal policy could not be further from the truth. Empirical evidence shows that the last ten years have been one of the most pro-cyclical fiscal periods in Ecuador over the past 50 years. We prove this by examining the cyclicality of government expenditure (see Kaminsky, Reinhart, and Vegh (2004) for a detailed discussion of why this variable can be useful when analyzing fiscal cyclicality).

We present both cycles for the period 2007:Q1 - 2016:Q3 in graph 4A. As it can be seen, the government spending cycle almost perfectly matches the economic cycle. It increases during expansionary periods and declines during slowdowns. In fact, the correlation between these two series is 0.51 (vs. -0.00 for the period 2000:Q1 - 2006:Q4). Additionally, we test the statistical significance of this result by running an OLS regression of both cyclical components. The specification of this regression is as follows
cycle log(government expenditure) =α+β* cycle log(real GDP),

where β is our parameter of interest. A positive β means that fiscal policy is pro-cyclical.

Our estimation shows that the coefficient of interest is positive and statistically significant, proving that the statement that fiscal policy in Ecuador has been countercyclical is absolutely false. Graph 4B) shows the scattered plot with the data and the estimated regression and Table 1 presents the results of our estimation and the correlation coefficient for Correa’s administration, the period before Correa’s term during dollarization (i.e., 2000-2006), and the decade before dollarization (i.e., 1990-1999). In all the subsamples the conclusion is that fiscal policy has always been pro-cyclical, but even more so while Correa has been in office.

Graph 4A: Cyclical components of government expenditure and real GDP from 2007:Q1 to 2016:Q3 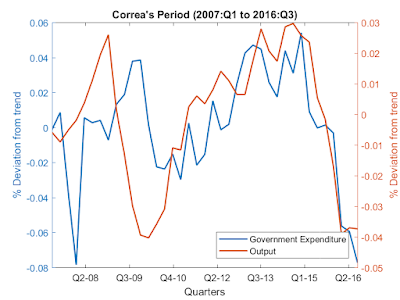 Graph 4B: OLS fitting of cyclical components of government expenditure and real GDP from 2007:Q1 to 2016:Q3 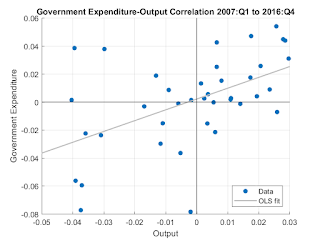 Note: We use quarterly data of government expenditure and real GDP filtered with the HP filter after taking logarithms for the period 1965:Q1 to 2016:Q3. Source: Central Bank of Ecuador and Gachet et al. (2011).

Alternative Fact 4: from Chang and Galbraith post “Compared to 1.5 percent annual per capita GDP growth from 2006 to 2016, per capita GDP growth averaged just 0.6 percent from 1980 to 2006. From 1980 to 2000, a period during which Ecuador had a number of loan agreements with the International Monetary Fund, Ecuador experienced a considerable economic failure, as GDP per capita fell by 1.5 percent over those two decades. This failure almost certainly resulted at least in part from the neoliberal policies of cutting spending, privatization, inflation-targeting, deregulation, and others that also made the Ecuadorian economy increasingly vulnerable to external shocks. In the 1960–1980 period, by contrast, per capita GDP growth was 110 percent.”

We need to point out two limitations in this analysis. First and most importantly, arbitrarily choosing the period from 1980 to 2006 generates a bias in the average growth rate since Ecuador dollarized its economy in 2000, which represents a major structural break in any economic series. Second, although Correa won the election in 2006, he took office on January 15th, 2007, so Correa’s government started in 2007 and will finish in May 2017.

Interestingly, the average GDP per capita growth rate during the period 2000-2006 (during dollarization and right before Correa’s administration) was larger (2.76%) than that of Correa’s term (1.89%). This result is robust when considering total GDP instead (4.52% from 2000:Q1-2006:Q4 and 3.42% during Correa’s administration). It is also important to point out that oil prices and revenue during 2000:Q1 to 2006:Q4 were much lower than those during Correa’s administration, suggesting that Correa´s Revolucion Ciudadana fell short in producing economic growth through government intervention, even in the presence of extraordinary revenue flows.

The authors also mention that the fall in GDP per capita from 1980 to 2000 is explained entirely by the loan agreements with the IMF, disregarding other significant exogenous shocks to the economy. In this regard, it cannot be ignored that on March 5th 1987 two major earthquakes hit Ecuador resulting in 1,000 deaths and collapsing the oil infrastructure. This translated into a GDP contraction of 15.8% (13.7% in per capita terms) in that year, the lowest growth rate registered since 1965. Additionally, in the period 1997-1998 Ecuador suffered the effects of El Fenomeno del Nino. By no means do we pretend to explain the negative growth from 1980 to 2000 as a consequence of these two natural disasters, but it is something that should be considered or at least mentioned in a rigorous analysis.

We have provided simple but conclusive evidence that in the last 10 years Ecuador’s economic performance depended greatly on oil prices, fiscal policy has been pro-cyclical, the involvement of the central bank in the economy is putting the dollarization regime at risk, and that during the dollarization period the largest economic growth was achieved between 2000-2006, not during  Correa’s administration. All of these conclusions are the exact opposite to those presented in Chang and Galbraith’s post and signed by other 50+ economists.

We finally would like to highlight with this post that economic analysis should be done with more professional rigor even when it is published in blogs. When describing stylized facts such as the ones in the CommonDreams post, the economic analysis should at least attempt to eliminate the ideological veil. For another critique to some of the similar conclusions drawn in Chang and Galbraith post see Manuel Gonzalez post.

Finally, we have sent an email with the link to this post to Chang and Galbraith, as well as to the 50+ economists signing the post (or the one’s for whom we found their emails). We have offered them the opportunity to respond through comments in this blog. We will publish all the comments that they may have, or if they require more space, we will be happy to publish in our blog any posts related to these issues.

Note: We found a coding mistake that drove us to make a mistake in the calculations of the level of pro-cyclicality of government expenditure. In the current text we have corrected this. Although the correlation coefficient is significantly lower (down from 0.93 to 0.51), the conclusions remain the same.